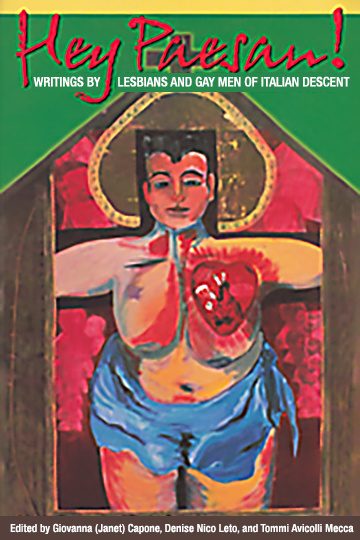 Writing by Lesbians and Gay Men of Italian Descent

An anthology of writing by Italian/Sicilian-descended lesbians and gay men in North America, Hey Paesan! is the first-ever look at the homophobia, silence and invisibility faced by members of an ethnic group that have been stereotyped as mafiosi and femme fatales. It’s a long overdue contribution to the growing awareness about multiculturalism in the Americas. It’s also queer pride, Italian style!

Praise from a reader:

As a lesbian Italian American I yearn to find myself in today’s whitebread Anglo-centric culture. Hey Paesan! is an anthology of essays from L/G Italian Americans that serves as that reflecting pool. By deconstructing identities through poems and memoirs, the authors describe what it’s like being a queer paesan! Molto bene!”

Giovanna Capone is a poet, fiction writer, and playwright. She was raised in an Italian American neighborhood in New York. Her work has appeared in Curaggia: Writing by Women of Italian Descent, Bless Me Father: Stories of Catholic Childhood, Unsettling America: An Anthology of Contemporary Multicultural Poetry, and many more. She lives in the San Francisco Bay Area, where she works as a public librarian.

Denise Nico Leto is a San Francisco Bay Are poet, writer, and editor. Her work has appeared in a number of journals and anthologies including: Curaggia: Writing By Women of Italian Descent, My Lover is a Woman: Contemporary Lesbian Love Poems, and the Chiron Literary Review. Denise has completed her first poetry manuscript and is working on a collection of essays on voice.

Tommi Avicolli Mecca: I started writing when I was ten. I hammered out plays on an old Underwood typewriter that my mother had in her bedroom. As a teen, I published poems in the South Philly Review Chronicle. At Temple University, I won the Young Poets contest for a poem I wrote about a high school classmate I was in love with. Since those early days, I have continued to answer the call of my life’s greatest passion: I spent 10 years working for the Philadelphia Gay News as a reporter, then Local News Editor and finally Managing Editor. Arriving in San Francisco in 1991, I wrote for a few years for the SF Bay Times. I published Between Little Rock and a Hard Place in 1993, then co-edited Hey Paesan: Writing by Lesbians and Gay Men of Italian Descent in 1999. In 2008, I was part of a group of editors that put together Avanti Popolo: Italian Writers Sail Beyond Columbus. This year, I edited Smash the Church, Smash the State: the Early Years of Gay Liberation for City Lights Books, to mark the 40th anniversary of Stonewall and the birth of gay liberation. I write regularly for beyondchron.org and maintain a website with some of my writings: avicollimecca.com. I have always been, and remain, a political activist as well as a writer, fighting for economic justice for all. That means affordable housing, living wage jobs, free public transportation, universal healthcare, and ownership of the means of production by the workers. Avanti popolo!