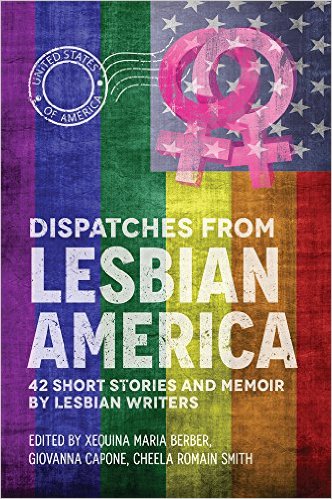 Now Available
$16.95 (pb) ● $9.99 (eb)Get the ebook from BedazzledGet the paperback from Bedazzled InkFind "Dispatches" at a local independent bookstore

After three years of work, we are proud to present this new anthology of 42 stories by lesbian authors, the majority of whom are living in the U.S, but also including one Canadian, one woman from the Netherlands, one from Aotearoa/New Zealand and one from Australia.

Dispatches from Lesbian America is a collection of short fiction and memoir from contemporary writers, some newly emerging and some well-known. Unique in recent lesbian anthologies, these thoughtful stories address themes meaningful to us in the modern world.

The book is available in paperback and ebook versions. See links below. Also available at Amazon.

Giovanna Capone is a poet, fiction writer, and playwright. She was raised in an Italian American neighborhood in New York. Her work has appeared in Curaggia: Writing by Women of Italian Descent, Bless Me Father: Stories of Catholic Childhood, Unsettling America: An Anthology of Contemporary Multicultural Poetry, and many more. She lives in the San Francisco Bay Area, where she works as a public librarian.

Xequina Maria Berber is a storyteller, writer, artist and school librarian. Most recently, she is the author of The Mermaid Girl, a work of juvenile fiction published in 2016. The inspiration for The Mermaid Girl came from the very first dream she had about a mermaid when she was five years old. Xequina is also a cartoonist, and draws and paints mermaids as well as many other magical and spiritual themes.

Cheela Romain Smith is a crusty old dyke cartoonist, webmaster, tattooist, and long-term journal-keeper from the Deep South. While publishing her cartoon work in alternative comic books such as Wimmin’s Comix, Gay Comix, and Girl Jock in the ’80s and ’90s, she fell in with the underground women cartoonists’ scene. Her graphics have appeared in mainstream publications, as well. She lives in Oakland, California.