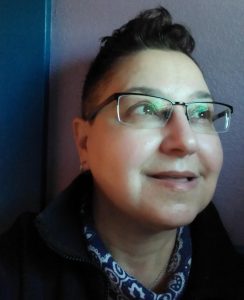 Giovanna Capone is a poet, fiction writer, and playwright. She was raised in an Italian American neighborhood in New York, whose strong immigrant influence still resonates in her life. She has been living in California for over twenty years, but she will always be a New York Italian.

Her most recent project is an anthology of short fiction and memoir by lesbian writers, which she co-edited with Xequina Berber and Cheela Romain Smith. It’s titled Dispatches from Lesbian America and it came out on February 25, 2017. Giovanna lives in the San Francisco Bay Area, where she works as a public librarian. You can see more of her work at: